Wanted: something else that has 4 wheels, a motor and does not currently function

I think there is still another spot in the car port...

Since I was 17 I've pretty much always had 2 cars, one to drive and one in some kind of state of restoration. For almost 6 months I had only had one car, and I was getting an itch to own something that I could take a wrench too.

Growing up my sister had this amazing 1974 VW Beetle, I LOVED IT, and she hated it. I begged my parents to save it and give it to me, but my sister and I are 11 years apart.

So I've always wanted a bug and I was moving into a place where I would have an extra parking space so I thought I should start looking. My requirements were it that it be a bug, for under $500, that was a complete car. 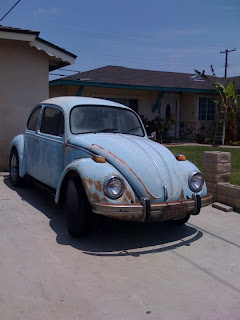 Posts to look forward to in the future include such titles as:

"Wanted: something else that has  4 wheels, a motor and dose not currently function" aka "I think there is still another spot in the car port"

"How come everything I play with is greasy?"

and the awesome up and coming blog post titled

"It only has TWO wheels and doesn't run, I totally have room for that in my neighbors garage"
Posted by Stefanny at 9:35 PM 1 comment: